A project is being run by Leatherhead Lions - one started by Nottinghamshire Ambulance Service - to relieve some of the suffering of children who have to be taken to hospital by ambulance, in possibly frightening circumstances.

Paramedics found a toy very helpful to calm down and communicate with the child, but even greater distress was caused by asking for the toy back when the Paramedic left. The Lions now supply to the Leatherhead and Dorking Ambulance stations a teddy bear in Paramedic uniform, that the child can keep when the Paramedic leaves. 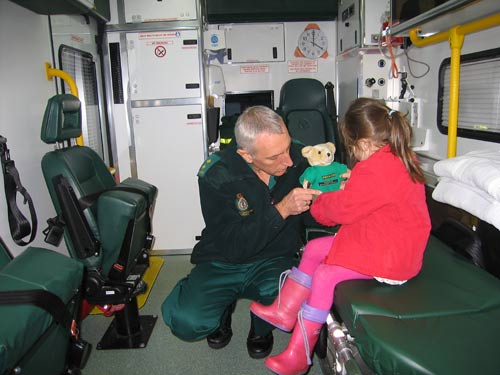 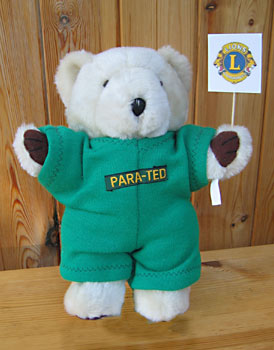 Some crew members have been so impressed by the toy that they have passed on their experiences with Para-Ted to other crews in the County, and to the Press:

"They certainly help. It is quite daunting for children to go in the back of an ambulance, so Para-Ted really eases the fear and sometimes just a little teddy helps".

"I attended an incident in the town centre where a mother was unwell. She was with two children who were quite distresed. While I attended to the mother my crewmate was able to use the Para-Teds to help calm them down. They found them a great source of distraction and we could show them, using Para-Ted, what we were doing to Mum. Really good to have them".

"We've used them a lot with small children; they've worn sats probes, had plasters and slings put on them - before repeating the procedure with the real patient".